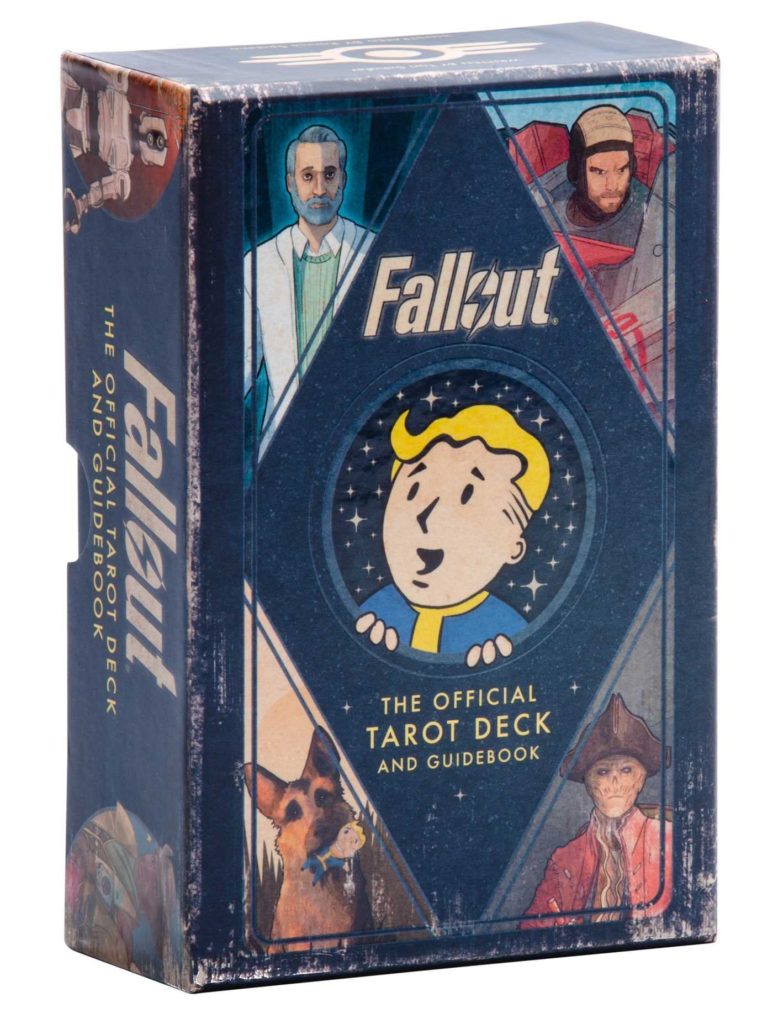 The Fallout Tarot (2022 edition) is a thematically accurate and very pretty tarot deck with a useful guidebook that will tickle the fancy of any Fallout and Tarot enthusiast, even if it takes some liberties with traditional card contexts.

A sturdy clamshell case, with inset deck space in the lower half and ribbon for card extraction. The cover artwork is distressed (especially the edges) to give it an aged and slightly withered look, which is very fitting to the Fallout appeal. The only thing that would have been better might have been a lunchbox style container, or maybe a medkit looking package, but these can be an aftermarket or crafting project for an enthusiastic Fallout crafter to create.

The guidebook (you can’t call it a booklet) that comes with the deck is an edge-bound, 128 page full color book. The artwork inside and out is also suitably distressed to fit the Fallout feel. The ‘Understanding the tarot’ section does a good job of describing the overall structure of a Tarot deck, and in particular the differences between the Suit names from a traditional RWS Tarot and the Fallout Tarot (more on this later). I want to especially call out the open-mindedness of this section which ends with a clear endorsement of accepting “many different gender expressions.” Bravo to the writer, Tori Schafer, for including that and other inclusive language.

The bulk of the book is dedicated to describing all the cards, their imagery, and normal vs. reversed meanings. For a newcomer to tarot this is all very useful, but even an experienced reader can benefit from understanding the specific choices made with this deck design (more on that later). Even a casual Fallout 4 player may not recognize all the characters at play in the deck and the guidebook does a good job of describing them and their role in the world as well as the tarot deck.

The final section of the book describes caring for your deck (very standard fare here, I kinda wished for something more post-apocalyptic in feel), and provides three sample spreads that are appropriately Fallout themed: A three-card “Fortune Finder” spread good for ‘where am I, what’s going on, and what should I do about it?’ situations. The five-card “Wisdom of the Wasteland” spread looks into the emotional contexts of a changing situation: what could I lose for leaving where I am, or gain from where I could go? Finally, “Mama Murphy’s Insight’ is a seven card spread which is intended to provide more general inspiration and guidance when no specific question or goal is in mind.

Overall the guidebook is a great improvement over the old school ‘little white book’ that traditionally comes with a tarot deck. It’s an additive value to the entire set and an essential component of the experience.

The cards of the Fallout Tarot fully embrace the theme and feel of the setting. The artwork, front and back, is distressed on the edges to give everything an aged and worn feeling. The material of the cards is thin and a tad plastic-y in texture. For some people the texture of the cards is important and the choice here works in the favor of the theme: anything else wouldn’t have survived the apocalypse that precedes the Fallout setting. It would be a slight improvement to have actually frayed edges to the cards; maybe some daring Tarot immersion enthusiast could modify their cards to add that effect. Maybe one day when I am brave.

The artwork is stylized, colorful, and also aged to look like something that survived the nuclear apocalypse and the use and abuse that would follow. Most of the characters are shown in portrait style and are either characters from the Fallout 4 setting (post-apocalypse Boston and the Commonwealth), or the iconic Pipboy.

Rather than the traditional suit names and elemental associations the Fallout Tarot uses Muskets for Wands/fire, Lanterns for Cups/water, Synths for Coins/earth, and Steel for Swords/air. In a lot of decks that decide to depart from the traditional RWS suits the risk is that traditional readers might get lost in the transition, so it’s all the more important for the choice of suits to be clear in their meaning and relationship to each other and to the world. The choice of minor suites in the Fallout Tarot strike a fine balance between thematically appropriate choices for the setting and what can easily be picked up and utilized by someone coming from the tarot world first. Unlike other decks that have broken from the traditional structure <looks sideways at the Dungeon and Dragons tarot>. The ‘pip’ cards are, unfortunately, represented by ever increasing stacks of the iconic items that define the suit (guns for Muskets, robots for Synths,  sharp things for Steel, and light sources for Lanterns). This is a pity, because the opportunity to craft scenes from the world and use them for pip cards would have made this deck fantastic.

Reading with this deck

While a very pretty deck, the Fallout tarot isn’t without its challenges. With all the Major arcana, and I do mean all of them, being portraits of notable characters, one loses some of the situational information and aspects that could be represented. In this deck the Major arcana are all about characters and their meta in the setting. It’s quite different from traditional RWS interpretations and takes some getting used to. However none of the cards are really wrong in their imaging, just different. Take the Wheel of Fortune card, for example. The choice of Mama Murphy as the Wheel at first distracted me. I would have expected the iconic great gear-shaped door-plug of the Vault to be the imagery of the Wheel. However her role in the story isn’t far off: the Wheel could be good, or could be bad. Mama Murphy’s visions are vague and lead you into trouble as often as fortune. Since her ‘sight’ is fueled by dangerous drugs every time you seek her wisdom you risk her health. For another example: Dogmeat is The Sun. I kinda get it. The non-human supporting character’s relentless energy, support and companionship fit well into the Sun’s message. The biggest downside of this deck are the pip cards: there are iconic scenes and moments in the Fallout verse that would make excellent examples for the minor cards and yet the minors are represented in simple.

For me this deck will go into my Fallout tabletop gaming kit (and yes, it all goes into a lunchbox), and I’ll use it playing the game with my friends for inspiration and as a play aid. I wouldn’t really use it for readings when Fallout isn’t the focus or theme of the event.

If you’re a Fallout fan and a tarot enthusiast this is a must have deck. The overall quality and attention to detail, and honor done the setting are excellent. The simplistic pip cards for the minors is a disappointment but not a fatal one.